Rocking it in the Afternoon ! Last year, I “met” Ross Kinney, who was running one of his many 26.2 mile races to help raise funds and encouraged awareness for the Leukemia & Lymphoma Society.

I donated some rocks to his project to be used as talisman gifts for his supporters. 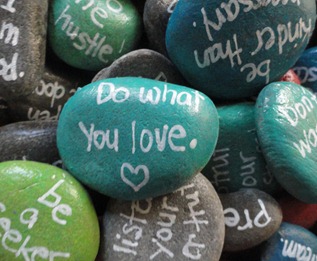 This year, Ross is supporting a 15 year old wonder woman, Cassandra Perkins, who is running in the Colorado Rockies later this year for the same wonderful and inspiring reasons.

Ross asked me if I would like to help out again. I mean, how perfectly do the Rock My World rocks fit with Cassandra’s tag line, “Cassandra Rock the Rockies !”

The only thing that gave me pause was when Ross gave me the numbers.

He was thinking about 500 rocks…

Could I do that ?

I have to say that I almost said no. 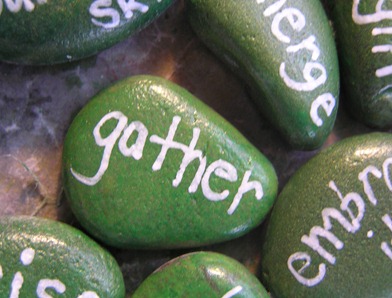 But then I thought, the Rock Fairy doesn’t have to spread the love all by herself ! And  many hands make very light work ! So I called on my wonderful group of arty friends to help out with the rocking task. 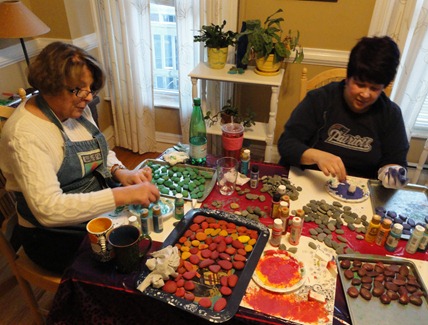 and Barb and the other Terry 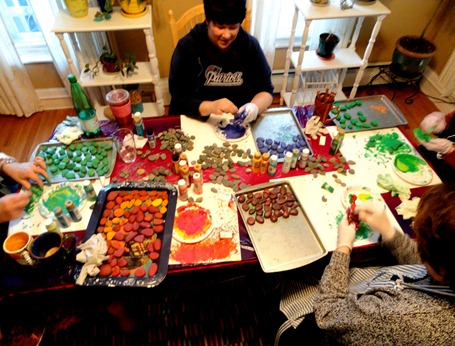 (David and I counted them this morning) 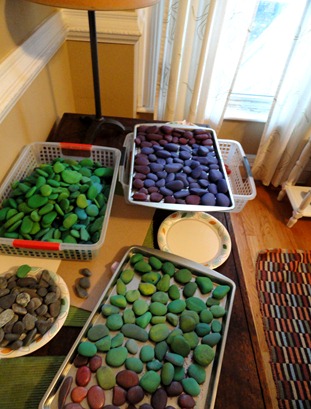 We had a delicious lunch of quiche (store bought life-savers !) and salad provided my me.

And then we had got our hands dirty… 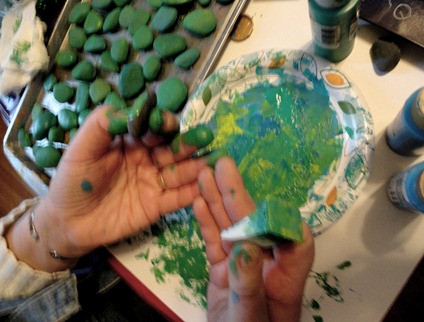 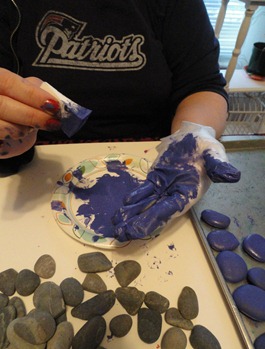 And of course, there was a sweet break in the middle of the afternoon, for coffee, tea, chocolate and the cutest little cupcakes that Terry H. brought. (Which I forgot to take a picture of but man, were they cute and yummy !) 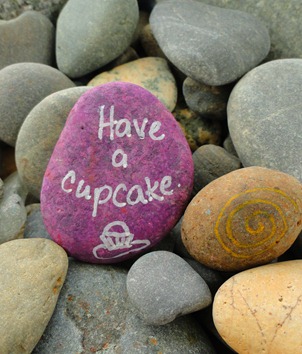 With the help of these beautiful, extra sets of hands,

the Rock Fairy’s work was made a whole lot easier !

And the message of showing Love for One Another 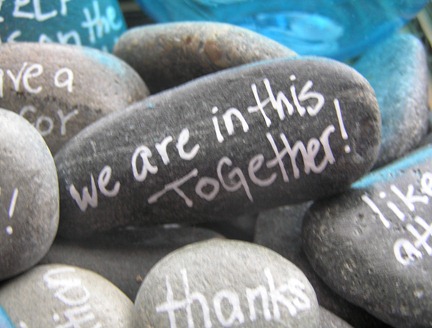 will get spread a whole lot further ! 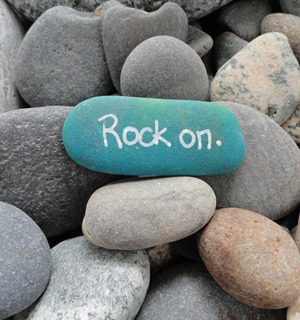 Cassandra, and the Leukemia and Lymphoma Society,

the Rock Fairies have your back !!!

And this Rock Fairy in particular 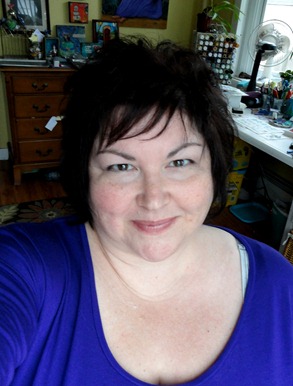 is feeling so very, very blessed 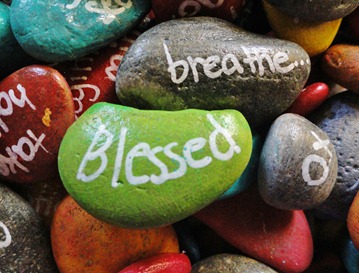 to have such wonderful, generous, loving and caring women in her life.

And also to know so surely in her Soul what her job is on this planet.

LOVE is the answer to every question, Baby ! 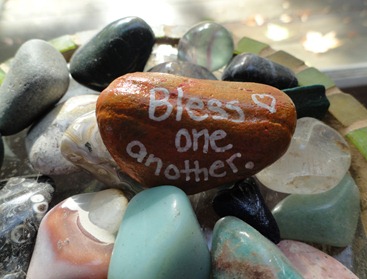 I hope you find some simple ways to join in and spread the LOVE today too, Beautiful Ones !

Here's to one awesome rock fairy and her assistants! You ladies are just beyond awesome. Isn't it amazing what we can do when we ask for each other's help? And when we say yes to the question? Congratulations to all of you.

YOU rock!!!!!!
What a special gift you give my sweet...and your friends as well. Bless ALL of your hearts...I wish someone would drop me off, a "have a cupcake"....tee. xo

Love came together to spread even more love and it sounds like you all had a "love"ly time! You are most certainly the reining queen of rocking it. What lovely gifts you give to the world!

wow...as if i didn't think your heart was big enough....you make 885 rocks for leukemia awareness...and have friends to help you, who obviously also have very big hearts....
WOW WOW WOW !!!
xoxo

I would love to get my 'rock fairy degree' too by learning from you... those are some fortunated women and how lovely that they came to the rescue! Love all the coloured rocks (and hands!)

I think you need to add the word angel to who you are being in the world.

Heartfelt thanks to you and to your amazing friends who earned their fairy wings yesterday in support of Cassandra's woman of the year campaign.

I am incredibly inspired and grateful to share this journey of hope and love with you.

Cancer has no response to love and kindness. Cancer loses every single time.

LOVE is the answer to every question, Baby !

Rock on my amazing friend!!!

What do you use to write on the rocks? Our Relay For Life's theme this year is Relay Rocks! and we want to give our survivors rocks to give to their caregivers. We would like to put either thank you or U Rock on the rock. Any hints would be helpful.
I found you through Ross. I am Kelly's Aunt.

Can I tell you how much I love your rocks? Many of the beauties you sent me went out into the world (little visitors especially love them and always want one to take home, which of course, I am happy to oblige) but I am also hoarding a few. They truly make me happy!

Every so often I see a saying or a word and think -- how great would that be for our Queen of the Rock Fairies? If you're ever interested in some extra words, let me know. I'd love to contribute to the magic!

AWESOME!! I am so excited by this, and how lovely of your friends to help--885 WOW! Rock ON dear Kim.

Amazing effort from you lovely arty ladies! All for such a good cause too!

I stand and applaud you and your group of artist friends! Yes, You all ROCK!!!

Way to go Kimmy and way to go Helper lady friends! Blessing our world and random acts of kindness! That's what it's all about!
I love you my beautiful one!
Mom

Our world would be so amazing if it were filled with more loving souls such as yourself and your artsy friends. Your heart has no boundaries! So impressed!!!......S

Love is amazing and so are the Rock Fairies!!!!...as a cancer survivor I can tellyou first hand how much your efforts will be appreciated!! The first time my husband and I walked in the Relay for Life (a cancer walk/fund raiser) was a magical night. Best wishes to Cassendra and you and your friends!

eeeeeeeeeeeee!
love the light of the cupcake one!
+ the depth of the blessed! (+ adore that GREEEEEN!)
+ love the pan after pan after pan of baking huuuuuuuuuuuge LOVE.
yes to you!!!!!!
xox

Fantastic story, about Cassandra and your friends and their rock fairy wings! xox Corrine

This is so inspiring Kim. You and your artsy friends are angels.
xx Jaime

Amazing and wonderful work Miss Kim. I'm so moved by all that you do to spread love in the world. Rock on my sweet friend!!!

That is an INCREDIBLE task. You and your good buds are amazing!

Beautiful Kim.. well earned Rock Fairy Wings... what a blessing to have such wonderful friends close by..
Kath
xx

You and your whole group rock. What a project. I wish I could have stopped in with a tray of cupcakes and ice cream for all of you.

I read this this morning...with only my phone as a tool.

This project is wonderful...so FULL of love and light.

and, now I am experience lymphoma first hand...I appreciate your efforts even more, if that is possible.

Amazing, amazing! What a huge job. You're absolutely right--the blessing of such lovely and generous friends, and knowing why you are here--these two things are incredible gifts, allowing you to share your gifts with the world, My Queen. I am sure that you will be blessing so many people with your small messengers that share Big Love with all. I also enjoyed seeing a bit of how you make the rocks, too. Blessings upon you, xoO

I missed this post because it was my first day of vacation travel, but we talked about it in Florida and I was so impressed then. Seeing the photographs and the amount of rocks and the helping hands just gave the whole thing a visual my imagination could never do. Congrats to the rock fairy and her fairyettes and all the best to Cassandra...you ALL rock!!!! ♥

Find out more about my Rock My World adventures !