Buried Treasure Alert ! : The incredibly talented Seth at The Altered Page challenged bloggers to return to the past, and uncover their own buried treasure in the form of one of their favorite posts on their own blog. Because the first time was such fun and because many other bloggers wanted to join in, this week Seth hosted a second go-around. Here is another oldie but goodie Fairy Tale from the Queen of Arts, originally posted on March 12, 2009. Enjoy it ! Then head over to Seth's blog to find a list of other talented blogger's traveling back in time !
Our story begins on a cool but beautiful day in Almost-Spring.
Our heroine is the Lovely Queen of Arts. 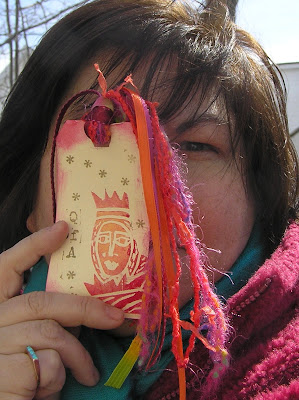 This Queen needed to escape the Castle. "Time for some Guerrilla Action." she thought. 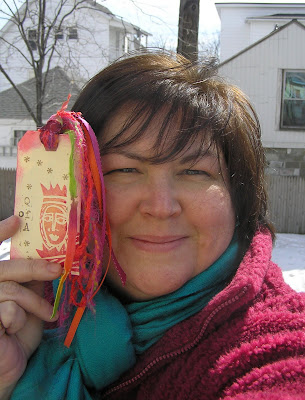 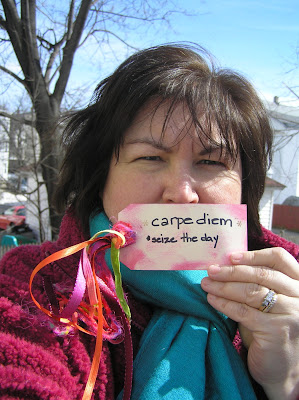 So the Queen went to the Royal Studio and played with her own hand carved "Q of A" rubber stamp and a few other toys to create these : 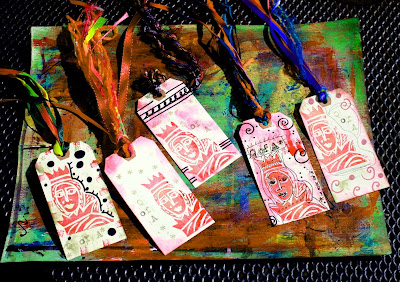 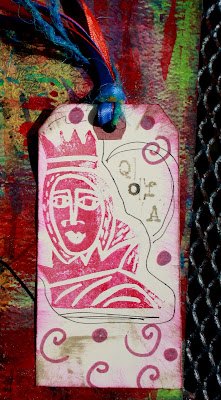 She came up with some Q of A quotes to adorn the backs : 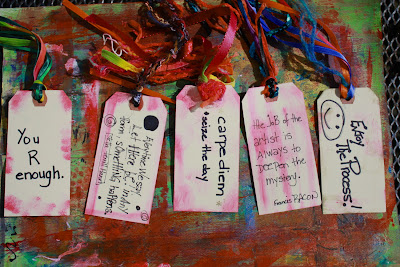 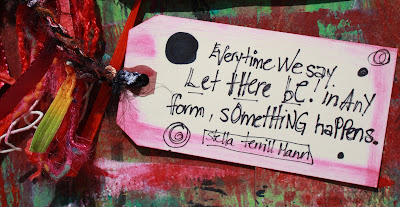 She called for her loyal servant : 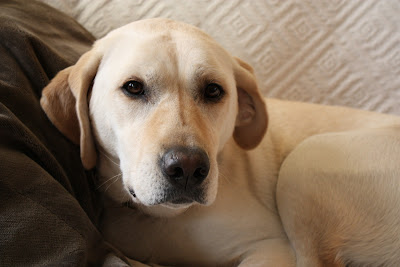 And off they went to commit Random Acts of Queen-ness, Guerrilla Art Style !

First stop : a tree in a local park. 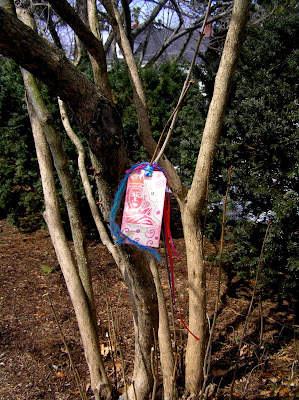 The Queen tied a Royal Tag onto the tree in plain view of a local peasant sitting on the bench across the way, but she was not interrupted. 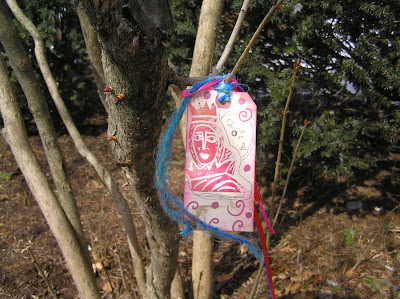 Her Majesty then found this lovely tree with bark bright red. "I must leave my mark on this magnificent tree." she thought. 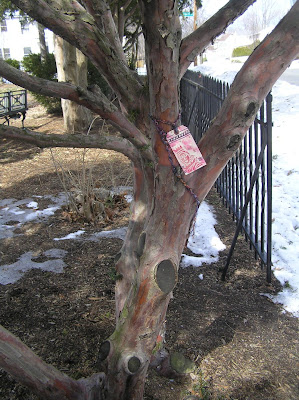 And she tied another Royal Tag, this time with a quote she adored, among its boughs. 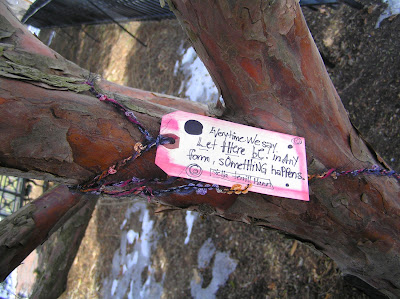 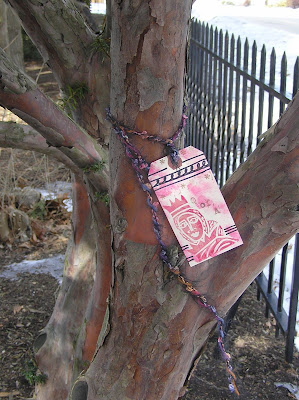 As the Queen and her loyal servant continued along their path, they came upon a sight that reminded the Queen of an Art adventure she had taken long ago. 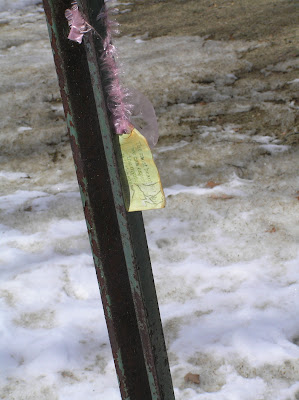 For there on a metal pole, in the middle of the "Park With Even Less", was a remnant from a walk the Queen had taken with Tags sent to her all the way from the other side of the planet. Tags sent to the Queen by the famous Guerrilla Artist, grrl +dog, way back in October, 2008.

The season had taken its toll on the Australia Tag : 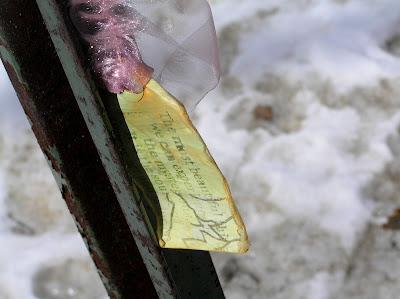 It had lost its vibrancy and the stamp grrl had put on it to the elements.

It no longer shone with its previous brilliance. 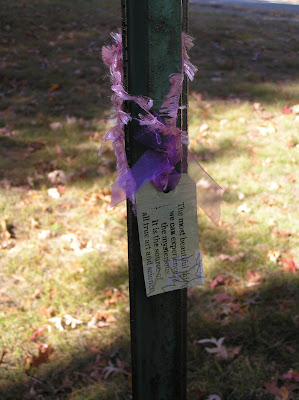 The Queen was saddened to see that time had taken its toll on the Australian Tag, just as it had on her own eyes with their beginnings of crows feet and their need for bifocal lenses.

"Our youth is gone, my friend." whispered the Queen to the withered tag, quietly so the peasants did not get frightened by the fact that their Liege was talking to herself in the park.

And then the Queen's inner artist took over. Youth may be gone but in its place : Artsy Wisdom.

The Wise Queen tied two of her bright, newly created tags on to the pole, one above and one below the worn Australia one placed there so long ago. 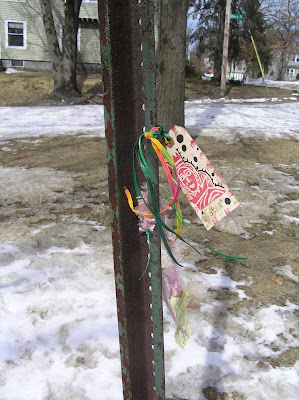 She thought to herself : "I may be older by a season or two, but I have learned that Any Time is the right time to dress things up and have a Good Time !" 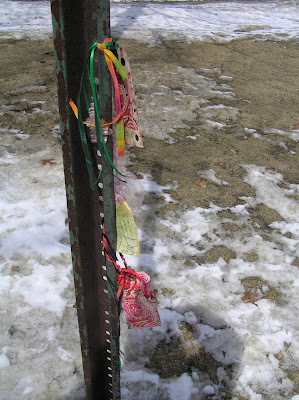 We're here for a good time

Not a long time

So have a good time

love it and love you for having done something like this...I want to do this, too !

and your smiling sneaky eyes in that one photo just made me laugh and made me wish so much that I was meeting you at squam...

Kim, this is so cool...so kind and generous! I love performing anonymous RAKs....I always feel hugged when i stop by for a visit on your blog!

Great post, thanks for digging it up. I really like this idea, I think I'm going to do it on my site.

I remember the day that the Queen and her loyal servant went about wrapping the Queen's wisdom on trees!! And I remember the Trooper song...(that one is going around lately!! lol!!!). Great post that you have unearthed for Seth's challenge oh Royalness!!!

what truly perfect post and idea and servant...if I ever found one you hear me from the house tops...

Great post Kim, love this idea. Would love to do this here, but suspect from previous loud noises made within our local council that they would be purple from apoplexy over this idea here! (but it might be fun to watch, LOL). Thanks for popping in to say hi over on my blog too. Love hearing from cyber space friends!

OMG!!!!! Long Live the Queen....I loved your post sooo much....and the loyal servant stole my heart! Thanks for visiting and I can't wait to come back for many more visits.

I remember this! I loved it now and then :) I like traveling down memory lane with your posts!

I remember this one (before I came out of lurking and decide that I really could comment). Enjoyed it then and enjoyed it even more this time! Thanks!

You know, tagging is a crime if you do it with a can of paint. ;o) I like your version of 'Random Acts of Tagging'. You made me smile.

What fun! Lovely tags too. I've come to appreciate tags as I never had before. I'm so inspired by what you did with them - creating them then setting them free in your kingdom. Whee!

what a wonderful re-post!! your tags were so much fin and inspiring, and seeing your bright smiling eyes brought a big smile to my face!!
sending love, Karin

rock on guerrilla queen of arts! I am sooo happy that you chose to re-post this one ... make me happy ... and inspired to try another random guerrilla attack, so thanks for the inspiration and for taking us along with you ... AND for introducing the great song, too. :)

What a wonderful project and the perfect post to pick!! Thanks!

Find out more about my Rock My World adventures !